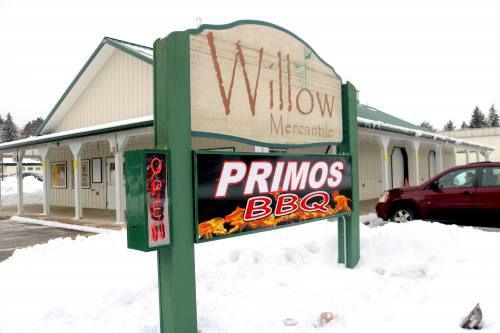 After starting the process in September, the move of a Cadillac West restaurant to downtown Cadillac is finally complete.

Primos BBQ opened its doors in May 2018 and since that time it has been a destination for those who love Texas barbecue in Cadillac West. While visitors to the area and locals alike have enjoyed brisket, ribs, chicken wings, pulled pork and other barbecue stables at the Cadillac West location, owner Jason Towers said he had been talking with his partner Mike Yount about potentially moving.

It was about that time that opportunity came knocking.

Cadillac West business owner Michael Blackmer had purchased the old Marina Restaurant and approached Towers and Yount about buying the building that housed Rosa Blanca and Primos BBQ. Towers said there was interest but they would need a place to go with Primos before they would follow through.

“We didn’t want to close Primos and then open it back up later. (Michael Blackmer) was good with that and he understood,‘ Towers said.

It was at that time Towers and Yount started looking for a new location to house their business. It didn’t take long before they settled on purchasing Willow Market and Meats. The process of purchasing Willow, however, was a slow one. On Wednesday, Towers said the process was finally ending as they closed on the business.

Towers said the plan is to leave Willow the way it is as much as possible and simply add what Primos BBQ does to the menu.

“We (Primos) will have an identity, but it will be in the Willow Market. Willow has a following after 10 years in business and it will remain Willow. It’s just Primos will be there, too,‘ he said.

While the plan is to meld the two businesses as one and keep things the same as much as possible, Towers said this time of transition also can be the opportunity to see if anything needs to be tweaked or changed. Some of those tweaks will include adding a growler filling station and more opportunities for catering.

With the closing on the building sale scheduled for Wednesday morning, Towers said the plan is to have Primos BBQ up and running on Feb. 17.

For A Faster Response

Please fill out the donation form completely. You will have to download and save the document to your device.  Then fill out and attach (with any other pertinent information) and email to sales@willowmarket.com.